This year’s INCC convention was held at the Embassy Suites in Cary, North Carolina. Thursday morning, we began with a general meeting, hosted by your INCC board. The board members were introduced, convention schedule reviewed and reports were made by various committees. This year, we were fortunate to have 12 first-time attendees.

There was a discussion, based on the report of our new Strategic Planning Committee. We are making an effort to sustain our club in these difficult economic times. Many suggestions were made and will be followed up. It was decided that the “INCC Journal” will go to 2 copies a year and an online newsletter will appear every other month to keep our lines of communication open. Please consult our website for additional, exciting online offerings for members.

Bob Schoenherr announced that our next convention will be held at the Embassy Suites in Greenville, SC beginning on 7/26/12. In 2013, we will be returning to Columbus, Ohio.

Jeff Mattison, our President, requested volunteers for the committees that we are forming. As everyone knows, the board can’t do it alone.

After the meeting adjourned, the Hospitality room was opened for snacks and 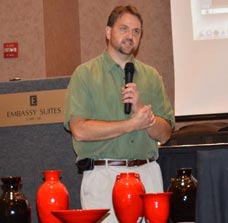 Our next program was presented by Ben Owen, a well-known North Carolina potter. Mr. Owen is the sixth generation of potters operating the same kiln. He spoke of his interest in Japanese pottery and how he has designed vases that were inspired by antique Japanese pottery. He told us about the abundance of good clay in North Carolina and that over 80 potters were working in the Seagrove area, where he is located. After college, Mr. Owen studied in Japan, where he was impressed and inspired by the Japanese simplicity in form and design. We were treated to many examples of his pottery, highlighting form, glazes and design.

Jeff Mattison showed an egg cup with a rabbit playing an instrument. This was obviously for a child and quite adorable. 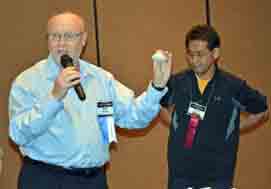 Scott Johnson shared his ashtray, which had a rather frightening devil painted inside. He also aroused considerable envy with his 14″ 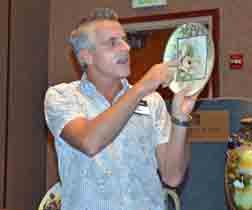 blown-out plaque depicting a group of Arabs holding rifles, his large moriage-decorated tankard with a Cardinal pictured and a 24″ cobalt palace urn with swans.

Jeff then showed his very rare figural owl lamp with an actual Nippon shade (pictured on the cover of this journal).

Linda Lau showed a Baby Ella “Famous” doll, which was modeled after a Kessner boy doll. It was all original, in the original box with the original price tag of $7.50. I was the next person to display a few rarities. I had a pen tray and inkwell in the hunt scene pattern and a ferner with lions on it which were done all in gold. Jerry Service showed his nail file, obviously part of a manicure set, with a very fancy moriage handle. 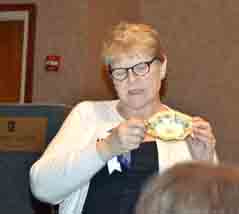 Doris Myers had a bowl with the goggle-eyed (sometimes called Campbell kid) boy. This boy was wearing a black coat, as opposed to the green coat we always see. Dick Bittner had a 10″ wall plaque with a scene surrounded by beautiful moriage Wisteria.

Nat Goldstein had a sardine dish, a lovely plaque with moriage flowers and a ferner which contained the hard-to-find metal insert. 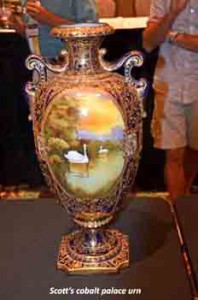 Finally, Jennifer Cavedo blew us all away with her cobalt vase, heavily decorated with silver overlay.

Following the cocktail hour and, of course, more room shopping, it was time for the Triangle Taiko Drum Group. We really didn’t know what to expect – anything from Beatniks playing Bongos to a full-out marching band. Imagine our delight when 7 people showed up with traditional Japanese drums – and even dressed in Japanese garments! They explained that their big drums were made from wine barrels and played a number of songs, which had everyone clapping and toe-tapping. Our members were able to participate. Tomo gave a most credible performance and then Jeff, Dick and Bob gave it a good shot. What a nice, fun-filled surprise the drum group was!

The Thursday Buffet Dinner was very enjoyable as we all ate and chatted. After dinner, the Ugly Contest and Auction was held. Nat Goldstein’s entry was a topless powder box; Judy Cody contributed a wall pocket; Jennifer Cavedo had a condiment set; Doris Myers came up with a phoenix vase and Jeff Mattison produced an unattractive, soft paste vase with a rooster decoration. The winner was determined by an applause vote and it was the wall pocket. All the items were then auctioned off and the wall pocket’s new owner contributed $102 for our treasury.

Jim Wroda, with help from his wife Lori and son Matthew, was our auctioneer on Friday morning. 144 pieces were auctioned off.

Some of them were:

And many, many other pieces of various shapes, sizes and prices. Marie Letizia and Rella Clock were our chairwomen this year and did a masterful job.

Saturday morning, after our bountiful buffet breakfast, we headed into the meeting room to hear some wonderful, personal Nippon stories.

First up was Doris Myers who told of an amazing coincidence. Upon her retirement, her workmates wished to give her a special present and they knew that she loved Nippon. So, they went to the Antique Trader and purchased a whiskey jug from INCC member Myrtle Drew.

Nancy Miller told of a time when she was newly married and (like most newly-weds) quite broke. She saw a beautiful Nippon square box decorated with Iris flowers, but she just didn’t have the $40 to buy it. Now, she would be more than willing to buy it, for the same $40. 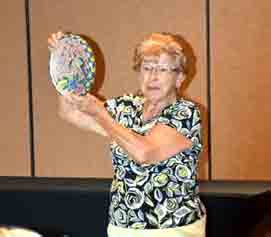 Mary Margret Pyle discussed a bowl that nobody else in her family liked, but she knew it was made in the Nippon era. Tomo agreed with her.

David Piper, a new member from Nova Scotia, had a Gouda-patterned handled bowl that he worried was a reproduction. He was happy to find out at the convention that it definitely is not a fake. 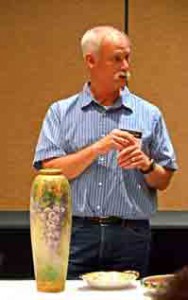 A short discussion of Nippon reproductions followed his happy ending tale. Lenny Taylor and Jerry Service also regaled us with some interesting Nippon stories. Audrey Eklund had pictures to illustrate her remarks about her Queen Louise urn, blown-out Indian bookends and some other pieces.

Dick Bittner related how unhappy he had been when his Nippon hatpin holder got lost in a household move. Then, luckily, it turned up again. Later, not so luckily, he found out that it was a reproduction. 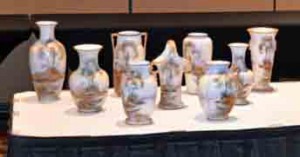 Jeff Mattison bought what he called a ‘plain Jane scene’ vase in an estate sale in 1978. Although it was plain, he loved the pattern and every time he finds a piece, he buys it.

Tomo Takeuchi told of meeting a man, in a shop in Japan, who was buying pieces for the Noritake museum. Tomo bought a collection of bowls and small vases from him. Susan West bought a huge set at a show in Northern Virginia for $400 and then got a $100 discount for purchasing other pieces.

Nat Goldstein related the story of how he, Rhonda and I went on a long ride to New Jersey to see some lady’s fabulous collection, which she wanted to sell. When we got there, we discovered they were all fakes. When we tried to convince her of that fact, she was in total denial and threw us all out of her house.

Jeff added a sad story about a coralene plaque that he ordered by mail. It arrived broken.

Linda Lau went shopping with her sister because her sister wanted to purchase a particular desk. On top of the desk, Linda saw a 24″ palace vase decorated in Cobalt and Roses, which she was lucky enough to buy.

Our next program was called Nippon Artistry – Sources Discovered”, always an interesting topic. Jeff Mattison explained that the designers of our Japanese porcelain needed to know what would appeal to Western tastes. So, they took their influences from many sources. Jean Francois Millet was a well-known artist. His painting “The Gleaners” and some of his other paintings of French peasants are portrayed on a number of pieces. Jeff also found the painting on which our Moose plaque is based at an auction. Herbert Thomas Dicksee painted animals similar to the Lion Face Plaque, the Bulldog plaque and the Lion and Lioness Plaque. There were many other artists mentioned whose work was directly connected with the Nippon artists. 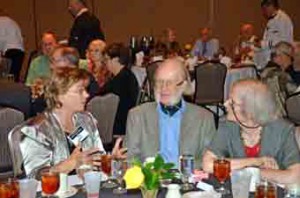 The afternoon session began with a presentation by the Strategic Planning committee and general discussion of our future plans. Many ideas were presented to help increase the membership of the INCC. The communication between members was discussed. Because the “Journal” has now been limited to two issues a year, Linda Lau will establish a Facebook page to further our communications . There were also suggestions about opening the auction to the general public, but this involves many problems, which will be looked into.

Our last program was “Native American Indians on Nippon Porcelain”, developed by Brian Larson, who unfortunately was unable to attend. Jeff Mattison did an excellent job of narrating this interesting presentation. Many aspects of the wide variety of Native American scenes, available to Nippon collectors, were shown and explained. 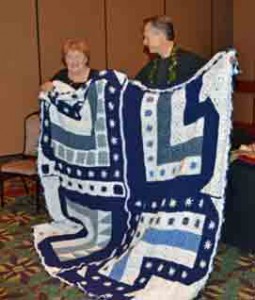 Saturday night brought our gala banquet. The food and drink were quite good and topped off by a special 30th Anniversary cake! As usual, many desirable prizes were raffled off and, this year, some were even sold. We even got to play “rock, paper, scissors” with Tomo once again. The beautiful kimonos, obis and other Nippon -themed items were donated by our generous members. The evening was topped off by the raffle for Gloria Addison’s magnificent afghan. Judy Cody, a first-time attendee, was the lucky winner. We hope this will bring her, and all of you, back for next year’s convention.

NOTE - if highlighted, you can click on this and it will take you directly to the item/icon!

MEMBERS, what a GREAT convention - how wonderful to see old friends and make many new friends, especially those we have met on Facebook and only gotten to talk to through social media! How great to get together in person! The success of this convention is owed to our President and Past President who put together a very informative, action-packed schedule - thank you President Joe Tunnell and Past President Linda Lau. Everyone had so much fun and learned so much. Those of you who were unable to attend - we truly missed you and hope that you will be able to attend next year when the convention will be held in Columbus, Ohio (Dublin) from August 10 - 12, 2023. Already, your new president, Nat Goldstein, is busy planning the next convention. "East Meets West" is the theme for the 2023 convention.

Members, it is time to renew your membership.  Information will soon be sent to members - renew by mailing in your payment or renew online. You will see that two of the banners have a button that you can click on. This will take you directly to a page where you can renew and pay by using PayPal - all so very easy, so just do it!

For so many years Bob Schoenherr has served the membership faithfully as our Venue Coordinator. He has secured the BEST accommodations and service from the hotels to host our conventions. Bob has now decided to step down and we thank him for all that he has done throughout the many years. We are VERY fortunate and grateful that Marie Letizia has stepped up to fill "Bob's shoes" and will be the new Venue Coordinator.

The latest E-Journal is available in the Member Tools. This Journal is chocked full of articles. This issue is the convention issue and, for those of you who could not join us, this will give you a taste of what you missed, It is another great publication by our wonderful editor, Linda Lau. "Member Tools." has so much for you to peruse.

Remember MEMBERS,  "Member Tools." is JUST FOR YOU! The most up to date  Member Directory is in Member Tools (contents are ONLY for members).