A Brief History of Nippon 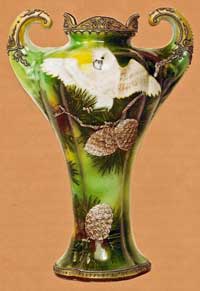 The Nippon era began in 1891 when the Japanese porcelain was clearly marked "Nippon" due to the McKinley Tariff Act. This act required that all porcelain be marked with the country of origin. ("Nippon" literally translates to "Japan".) This porcelain was made specifically to be exported to the west with designs and patterns that suited American's tastes. At that time, Japan had a thriving porcelain industry using methods used in Europe and the United States.

The Japanese items were less expensive than pieces coming from Europe and became very popular in the U.S. The porcelain was sold in gift shops, dime stores, fairs and even at the local grocery. Nippon items were also sold by Montgomery Ward, Sears & Roebuck, mail order houses and other department stores.
In1921 the United States government changed its position and required that Japanese imports no longer be marked "Nippon", but with "Japan". This marks the end of the Nippon era.

Nothing tells the story as well as the porcelain itself!
It must be seen to be appreciated!

Our main purposeOne of the very best things about belonging to the INCC is meeting so many fellow collectors who share a common interest.

We thank you again for your interest & look forward to your joining our friendly family of Nippon enthusiasts!

The Username is generally your email address

Members, sign in to read "What's New" for Members!

NOT a member?  Welcome! Glad you stopped by to visit our site. We hope you will take time to look at all that is available to the general public, but there is more information about the porcelain pieces of the Nippon era that is available exclusively to our members. We hope that you will consider joining us. For a small fee our members enjoy big benefits, like the E-Journal delivered right to your inbox, loads of historical information about Nippon in the Members Only section, and an invitation to the annual INCC convention. The convention is followed by the best of its kind auction of beautiful Nippon items. Our next convention, "East Meets West " is in Columbus, Ohio from 10 - 12 August 2023. The convention is known for its excellent schedule of presentations, its in-room sales of Nippon by members, and great camaraderie! So consider joining and attending - you will not regret it.

Join now to have access to our Member Tools section which includes: Journals, Notebooks, The Nippon Spotter, INCC Newsletters, and more as well as information about upcoming events.

You can find in the Member Tools the latest edition of the 2023 Winter INCC E-Journal available now - no waiting.